Winnebago unveiled the new Fuse 23F floorplan adding a new option to the already popular Fuse lineup. At only 24′ long – the Winnebago Fuse has all the amenities of larger class C’s with a full bathroom, queen sized bed and plenty of storage. The Winnebago Fuse 23F boasts large holding tank capacities for a coach of its size. With a 33 Gallon Fresh Water Tank, 40 Gallon Black Tank and 43 Gallon Gray Tank you’ve got what you need to go wherever your travels may take you. 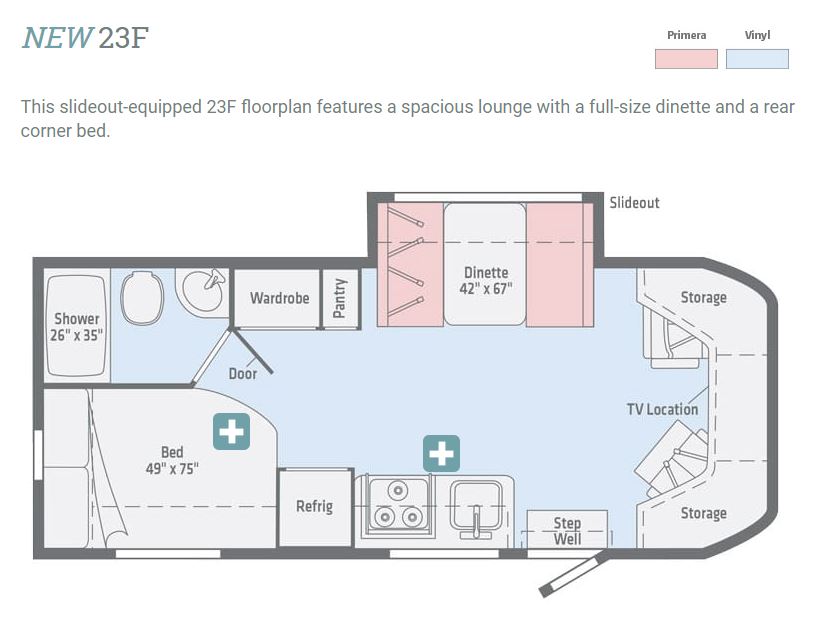 Designed around the Ford Power Stroke diesel engine, the Winnebago Fuse comfortably accommodates up to four adults in a nimble, fuel-efficient package. Three surprisingly roomy, slideout-equipped floorplans come complete with a full galley, entertainment system, and a full bath with a shower. In the rear-bath 23A, the Flex Bed System lets you opt for twin beds or a single queen bed, the 23T features a corner bath and walkaround queen bed, and the 23F a convenient corner bed. Each Fuse includes a powered armless patio awning with LED lighting, solar charging system, and a residential 110V refrigerator, while the available bike rack and a host of other options let you configure your Fuse to your needs and taste.

For more information on the Winnebago Fuse 23F please call 1-800-343-6255 to speak to a Lichtsinn RV Sales Consultant!

Winnebago has several very popular Compact Class C RVs – the Trend, Fuse, View and Navion. They come in at various price points, lengths, and chassis types. We compared the coaches’ floorplans, price, measurements and chassis so you don’t have to! 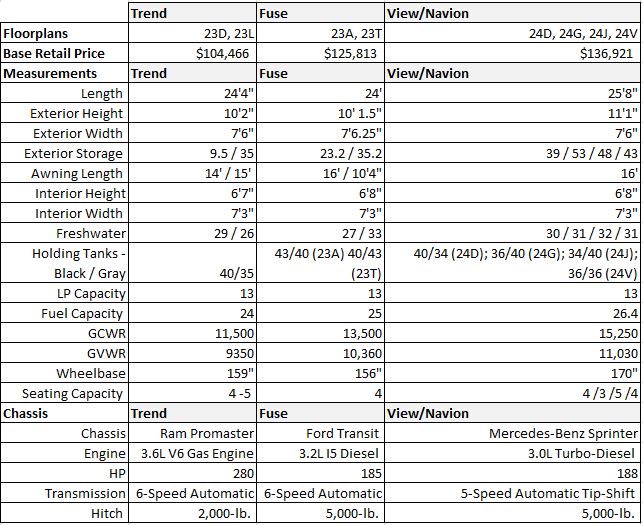 The Winnebago Trend – Roam the country on your own terms in the Trend, Class A living in a compact Class C design. A coach built on the Ram ProMaster chassis that has plenty of power with its lower floor front-wheel drive and strikes a bold pose. Inside you’ll find high-end features such as LED lighting, MCD blackout roller shades and soft Ultraleather furniture, including two Easy Swivel cab seats that spin turn into the main body. Two 23-foot floorplans give you the nimble footprint to go almost anywhere with a surprising amount of sleeping space thanks to the Flex Bed System in the 23D and the available powered StudioLoft bed in the 23L. Don’t wait for adventure to find you; seek it out in the Winnebago Trend. 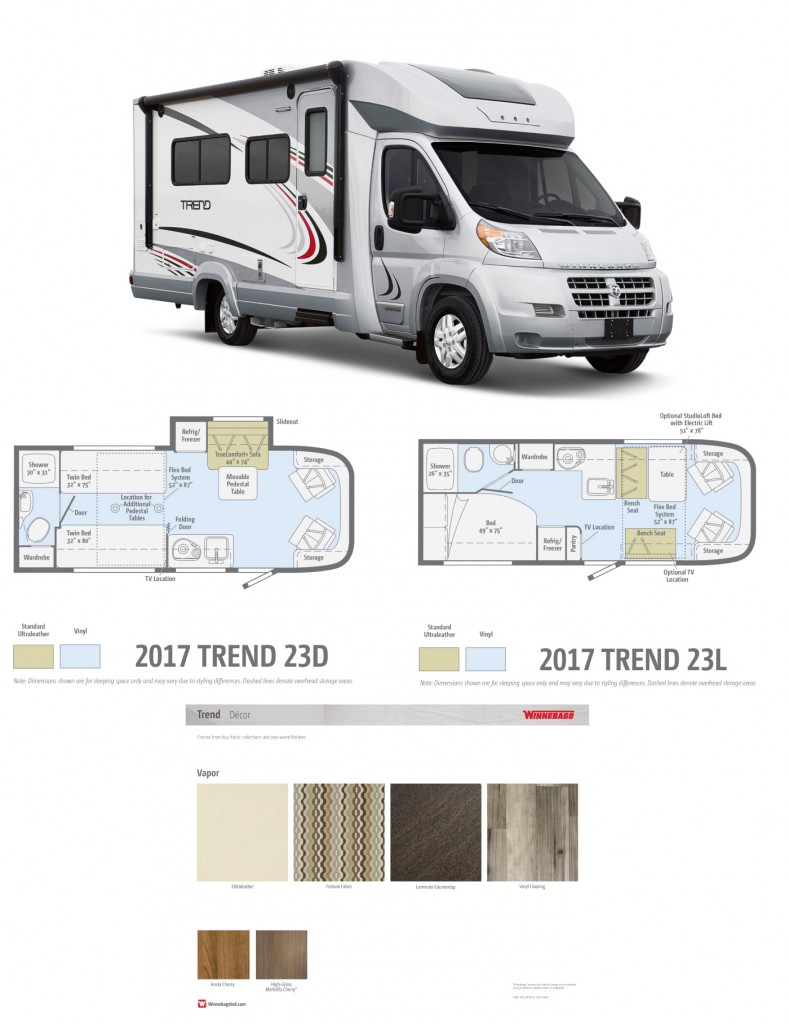 The Winnebago Fuse – Designed around the Ford Power Stroke diesel engine, the Winnebago Fuse comfortably accommodates up to four adults in a nimble, fuel-efficient package. Two surprisingly roomy, slideout-equipped floorplans come complete with a full galley, entertainment system, and a full bath with a shower. In the rear-bath 23A, the Flex Bed System lets you opt for twin beds or a single queen bed, while the 23T features a corner bath and walkaround queen bed. Each Fuse includes a powered armless patio awning with LED lighting, solar charging system, and a compressor-driven refrigerator, while the available bike rack and a host of other options let you configure your Fuse to your needs and taste. 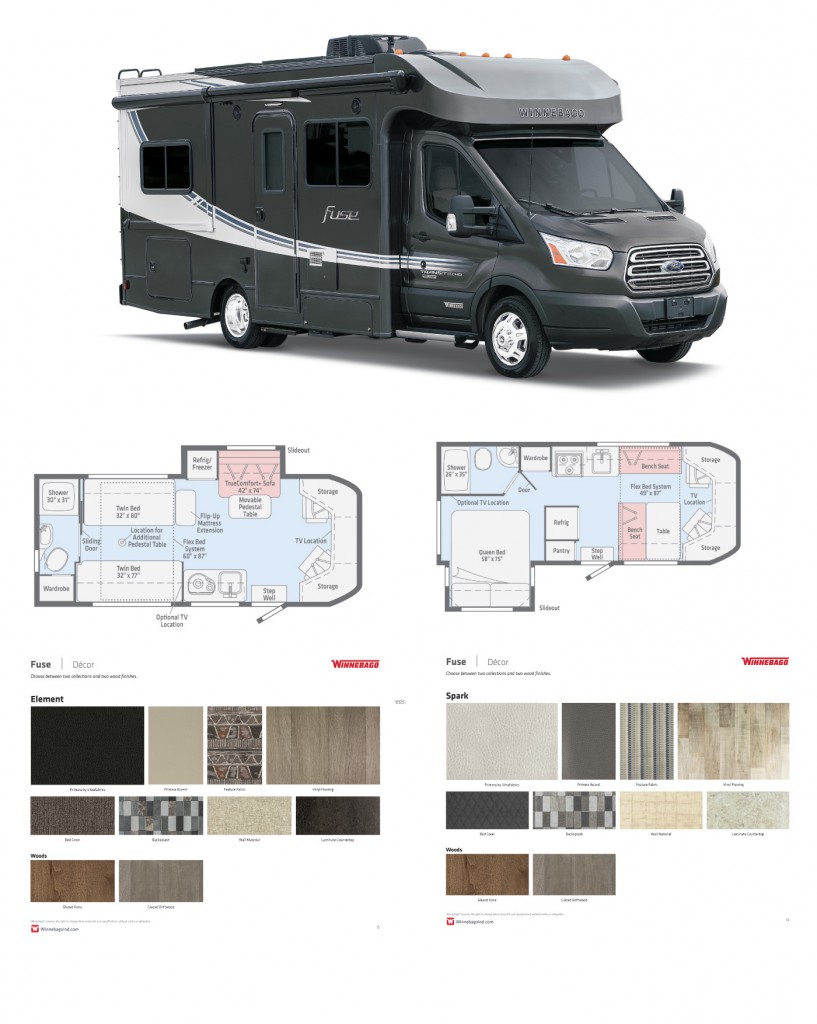 The Winnebago View and Navion – The motorhome that started the Mercedes-Benz Sprinter revolution just keeps getting better. From the powerful and economical turbo-diesel engine to the elegantly appointed interior, the Winnebago View and Navion are the ultimate in efficient, luxurious RV travel for couples and families. The View and Navion’s four slideout-equipped floorplans offer a variety of sleeping and living-space choices. All feature swivel cab seats for added seating flexibility in the lounge, a powered patio awning, and a cabover bunk for added sleeping capacity. For those seeking the ultimate Sprinter-based Class C motorhome, the View and Navion have never looked better.

DEARBORN, Mich., May 17, 2017 – As Don and Sonya Pace backed their Ford Transit-based motorhome into a spot at Smoky Mountain Premier RV Resort in Cosby, Tennessee, the spring Winnebago Fuse owners’ get-together was officially under way. Setting up camp and meeting friends is a source of pride for these new Fuse owners and founders of the annual gathering.

The get-together is one of a handful of enthusiast events held around the country each year where owners of Winnebago motorhomes gather to enjoy the outdoors and talk about their travels aboard their Transit-based RVs. The Fuse, and its cousin, Winnebago Paseo, are among a fast-growing legion of motorhomes being built on the Ford Transit van platform.

Based on the company’s global van platform, Transit was introduced in the United States for 2015. Since then, the domestic RV industry has been quick to embrace the platform, which offers gas, diesel and CNG/propane gaseous prep options, as well as three available roof heights, three overall lengths and two wheelbases. Transit has been a boon for companies like Winnebago, which are creating a burgeoning Class B motorhome segment in addition to new products from the Transit cutaway chassis for the larger Class C segment.

“We looked at a lot of competitors, but once we saw how open the Fuse felt inside and how it still drives like a go-anywhere car, we were hooked,” said Don Pace. “We like that it’s built on a Ford platform – not just because it has great performance, but because there are more Ford dealers around the country, so there’s that peace of mind. We just love our Fuse.”

The Fuse uses a dual-rear-wheel Transit van cutaway chassis for a full-feature, 24-foot Class C motorhome with kitchen, bath and a slideout – for comfortable sleeping for four adults. The Paseo is a high-roof, extended-length Class B motorhome featuring a full bath, kitchen with refrigerator, and sleeping for two adults.

Industry-wide Class B sales grew 36 percent in the first three months of 2017. As a leader in the commercial van/cutaway and chassis segment for nearly 40 years, Ford has a long history with Winnebago and other leading motorhome manufacturers. The ESeries cutaway is still a top RV platform in the Class C segment, while Ford F-53 remains among the most popular gas-powered chassis for larger Class A motorhomes.

“Our customers have responded incredibly well to the new Transit platform,” said Russ Garfin, Winnebago product manager. “They love the driveability and the smooth ride, and the feedback on both of the engines we use – the EcoBoost® gas and five-cylinder diesel – has been great.”

Winnebago has more than 130 dealers offering Transit-based motorhomes across the United States and Canada. With gas prices the lowest they have been in years, Garfin expects he’ll be designing more versions off the Transit platform.

“With low fuel costs and people’s desire to disconnect and get away from it all, we expect sales of Transit-based motorhomes will continue to grow,” said Garfin. “With easy-to-use RVs like the Fuse and Paseo, there are more products for a wide range of customers.”

As for the Winnebago Fuse owners’ spring get-together, Sonya Pace said they had a great time in the Smoky Mountains and got to meet some of the greatest people on earth. “We got to talk about our Fuses and where we’ve been,” she said. “The new owners get help from the experienced owners.”

And they’re already planning next year’s event, posting pictures to Facebook and Instagram, making new friends and sharing travel stories. “We’re expecting more at our next event, which we hope to do in the western U.S. because we have a lot of members out there too,” said Sonya Pace.